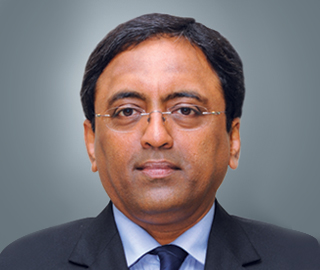 S N Subrahmanyan is Chief Executive Officer and Managing Director of L&T  – a USD 21 billion conglomerate, with over 80 years of experience being builders of nations; engaged in core, high impact sectors of the economy with integrated capabilities that span the entire spectrum of ‘design to deliver’.

SNS, as he is popularly known in industry circles, took over the reins in July, 2017 having previously, in his capacity as Deputy Managing Director and President, L&T, headed the construction business of the group which, is presently, among the top 15 contractors globally and India’s largest construction organization having clocked an annual revenue of USD 10 billion in FY 19. In addition to leading the fortunes of the L&T Group, SNS is Vice Chairman on the Boards of LTI and L&T Technology Services, Chairman of L&T Metro Rail (Hyderabad) Limited and Vice Chairman of the recently acquired billion-dollar, Indian multinational IT and outsourcing company, Mindtree.

Currently, at the helm, SNS seeks to lead the varied businesses of L&T to describe a new growth trajectory riding on the enormous benefits of digitalization, big data and predictive analytics that he drives internally with an almost missionary like zeal. He places a premium on forging and building enduring relationships with customers that according to him is one of the key determinants of success in the modern world of enterprises. SNS is also passionate about innovation, project management and talent, particularly in leadership roles.

With a degree in civil engineering and post-graduation in business management, SNS commenced his professional journey with L&T in 1984 as a project planning engineer. Apart from successfully setting up the Ready Mix Concrete business in India for the first time, his gamut of responsibilities increased as he rose up the ranks. He was largely responsible for establishing L&T as a significant EPC player in the Middle East, Africa and ASEAN. SNS brought to the fore the organization’s expertise for ‘Design and Build’ construction solutions on an EPC basis and has been one of the early exponents of aluminum formwork systems and precast technology for housing projects that has enabled the organization to build a wide range of infrastructure projects to speed and scale.

Recognized as the ‘Contractor CEO of the Year’ at the Qatar Contractors Forum & Awards function in 2014 in Doha, SNS was ranked 36th in the ‘2014 Construction Week Power 100’ and accorded the Leading Engineering Personality award in the event ‘Glimpses of Engineering Personalities’ by the Institution of Engineers (India). The Construction Week (CW) magazine recognized him as the ‘Infrastructure Person of the Year – 2012’ and has ranked him 13 in the CW Power 100 Ranking for 2019.

SNS has been conferred the Emergent CEO Award at the CEO Awards 2019 for his exemplary leadership and delivering seamless  growth for L&T and recognized as the CEO of the Year by leading Indian news channel, CNBC-Awaaz in 2020.

Other Members of the Board